Have you ever tried Googling yourself? You know, it’s when you feel like opening up the Google search engine, typing your name and clicking on “search”. I tried doing it recently by typing in Rhea Lorraine Lorenzo. What surprised me the most is the fact that the second site that was on the list is actually my Friendster account, which I have ignored for so long (what’s worse is that I typed the details of my profile there in alternating caps—a style quite popular then, but is considered a manifestation of being jEjEmOn these days. Oooh, the HORROR!!!).  Anyway, at least, the first one on the list is when I won a copy of Reader’s Digest Asia which they posted in their Facebook page. What I am wondering about is that my actual Facebook page does not come up in the first 10 pages (I never checked beyond that).

Oh well. Most sites that contain my name are usually those that were created by my schools, academic organizations, and friends. However, here are some sites that I have never visited before where I actually saw my name: 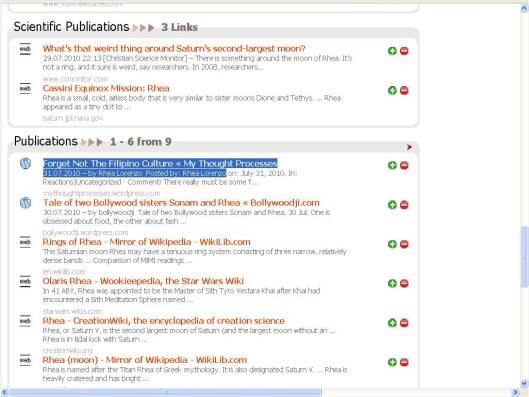 Perhaps, there are other sites but so far, these are the only ones I managed to see. With more than five websites that contain my name in it even if I had never even heard such websites exist, I felt quite crept out because this would only mean that WHAT YOU PUT IN THE WORLD WIDE WEB WILL STAY THERE, HAS THE POTENTIAL TO BE SEEN BY ANYBODY, AND CAN BE REPLICATED. It goes to show that we must always be careful with whatever information about ourselves that we publicize through the Internet.

Apparently, this twitter user (I think Laarnie is her name) is having some sort of a fight with a person named “Rhea Lorenzo”. Yes, that’s my name. Unfortunately, or well, fortunately, I am not this particular Rhea Lorenzo. But since it came out in the first page of the list when I typed Rhea Lorenzo in Google search, I believe that this is quite alarming. It is because a future employer who might think of looking me up in Google would possibly see that particular tweet and think that I am someone who gets into conflicts with other people a lot. Or perhaps there is another post that I have not seen which says something bad about a certain Rhea Lorenzo and people who I am trying to win over would see it and conclude that I am not an asset to the company after all.

Online, we must not only be careful on the information we publicize ourselves, but also the information about us that other people might be putting up. I think this is the importance of Googling myself once in a while. At least, I would know what other people might see online thus, I would be able to clarify the situation and/or the damage. It also made me realize that if I want things to be clear right from the beginning, I ought to make a specific online identity. If I make sure that I am the only Rhea Lorraine Lorenzo who uses Facebook with a blog called mythoughtprocesses.wordpress.com, then perhaps, it would be easier for those who would search my name to realize who I am as a person. I can’t risk establishing a bad reputation online after all. 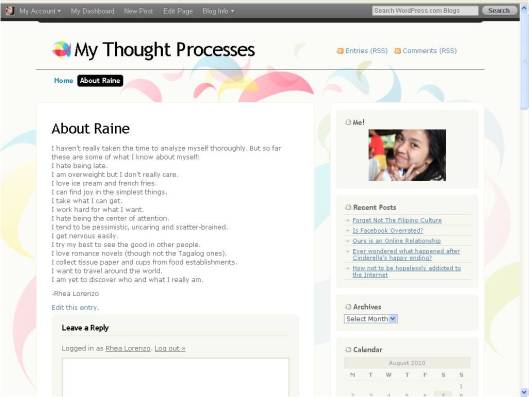 So now, why don’t you try Googling yourself?

P.S. Read here the article that initially inspired me to search my name in Google (long before we discussed it in our Social Media class): Virtual Vanity by Helen Walne, Reader’s Digest Asia, January 2010

16 thoughts on “I Googled Myself”

A bundle of thoughts, nerves, and feelings. Frustrated storyteller.

Fresh from the Mind